It's so good to have real cricket at last.

Podmore has certainly looked more of a handful than Stevens has. Though he has been the tighter of the two bowlers.

Kent now believe that Ali has edged to slip. Azhar did not walk and the umpires seem to have decided that it did not carry.

Bartlett has gone for 6 LBW. 200 is looking quite a way away at the moment.

And then Tom tries to pull out of a pull/hook and doesn't...so he goes for 49. Took an age to get to the fielder.

Let's see how Matt deals with this pitch.... and hope he doesn't.

The boundary is very very small all the way around - I hadn't realised until I went out to Gimblett's that is was quite a way in on that side as well. It is effectively a women's T20 boundary around the place.

Bitter wind but many stalwarts watching this day out. We would have been off for light by now at any other time in the county's history.

Azhar Ali hitting four runs, like several batsmen he made a start but didn't go on to get a large score.

Marcus Trescothick bowled by Harry Podmore, he did get to double figures (just). 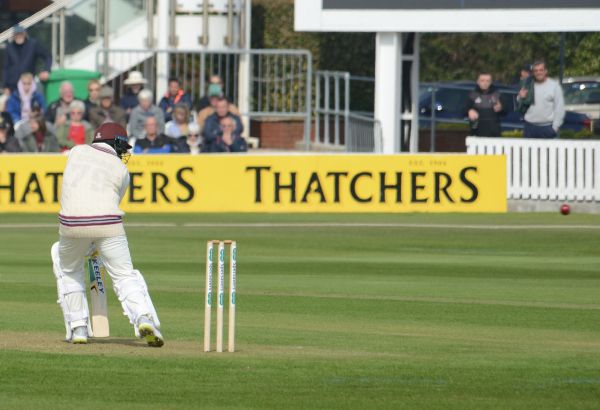 Azhar Ali playing a defensive shot to a ball from Matt Milnes getting an edge to Sean Dickson.

Eddie Byrom hitting his only four runs, one of four batsmen not getting double figures. (not counting the not out batsman) 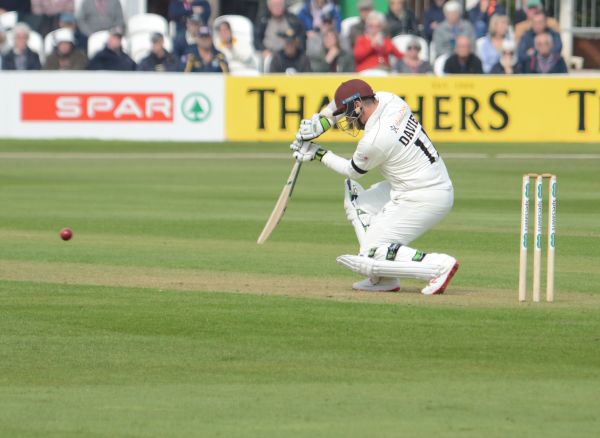 Steve Davies hitting one of his three four runs.

Tom Abell top scored but hit this ball from Mitchell Claydon to Matt Milnes when he was on 49.

This ball getting through Craig Overton's defence luckily missing the stumps.

Josh Davey getting himself in a bit of a tangle with this short ball, he decided not to go through with the shot.

Josh Davey got strangled down the leg side and was caught by wicketkeeper Ollie Robson off the bowling of Mitchell Claydon.

A different background on this photo of Sean Dickson scoring four runs.
Not very warm today I was trying to find a warmer part of the ground to take photos.

Well without the lights I don't think we would have taken two wickets, I believe we would have been off the ground because of bad light.
Current Page: 4 of 10
Goto: Forum List•Message List•Search•
Sorry, only registered users may post in this forum.
We record all IP addresses on the Sportnetwork message boards which may be required by the authorities in case of defamatory or abusive comment. We seek to monitor the Message Boards at regular intervals. We do not associate Sportnetwork with any of the comments and do not take responsibility for any statements or opinions expressed on the Message Boards. If you have any cause for concern over any material posted here please let us know as soon as possible by e-mailing abuse@sportnetwork.net